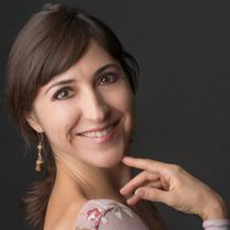 Miss Hartley was born in Bonn, Germany, and grew up in South Africa and Chile, where her parents danced for P.A.C.T. Ballet and Ballet de Santiago. She studied at the University of North Carolina School of the Arts with teachers such as Melissa Hayden, Duncan Noble, Gyula Pandi, Dianne Markham and Trish Casey.

In 1993 she joined Ballet de Santiago with Marcia Haydee as her director. In 1997 Ivan Nagy took over the company and Miss Hartley was promoted to soloist after performing the role of Myrtha in “Giselle” with guest artist Igor Zelensky. During her years with Ballet de Santiago, she worked with other guest artists such as Jose Manuel Carreño, Maximiliano Guerra, Carlos Acosta, and Lauren Anderson. She performed leading roles such as Olga in John Cranko’s “Eugene Qnieguin”, The Mad Lady in Ben Stevenson’s “Peer Gynt”, Mercedes in “Don Quijote”, The Countess in Ronal Hynd’s “The Devil to pay” and Stella in Mauricio Wainrot’s World Premiere of “Streetcar named Desire”. She had the opportunity to work with choreographers such as Ronald Hynd, Ben Stevenson, Trey Mc Intyre, David Parsons and Natalia Makarova.

During the summers of 2009 and 2008, Miss Hartley co directed and performed with local company Novaballet. She worked with upcoming choreographer Emery Le Crone in “Pulling to Break”, performed Vicente Nebrada’s “Our Waltzes”, and restaged David Palmer and Yanis Pikieris’ “Adiemus”. Miss Hartley has toured in Stuttgart, Buenos Aires, Budapest and New York. She performed with partner Astrit Zejnati at a Gala in Albania in 2005 and at the Miami International Dance Festival in 2006. She has been seen by millions performing as a guest artist in the Chilean TV talent show “Rojo Fama Contrafama”, where her father is a judge. In her spare time she teaches ballet at several dance academies of the valley, such as Tempe Dance Academy, Master Ballet Academy, and The School of Ballet Arizona. In the summer of 2011 and 2012, Miss Hartley was invited as a guest faculty member at the Goh Ballet Academy in Vancouver, Canada.

In 2013, Miss Hartley joined The Suzanne Farrell Ballet, where she performed principal roles in George Balanchine’s “Pas de Dix”, “Episodes”, “Agon”, “Allegro Brillante”, “Swan Lake”, and Jerome Robbins’ “The Concert”. In May of 2015, Miss Hartley retired from Ballet Arizona, and is currently teaching throughout Phoenix area. As of 2018, she joined State Street Ballet in Santa Barbara, as Ballet Master.