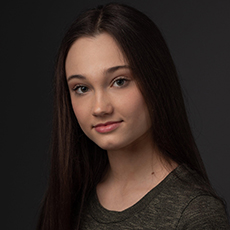 Avery started dance classes when she was 3 years old and immediately fell in love with the art of movement. At age 5 she joined a competition dance team that focused on all styles of dance. When Avery was 10, she decided to become more serious about technical training in Ballet and Contemporary while studying at All American Classical Ballet School in Tampa, Florida. In 2015, after moving to Scottsdale Arizona, Avery began extensive ballet and contemporary training at Master Ballet Academy. She fostered a love for choreography at a very young age and created her first self-choreographed piece at age 15 which placed in the Top 4 at International Ballet Competition in Daytona, Florida. Later that year she went on to perform as Principal Dancer in Master Ballet Academy’s String of Thoughts and was also a soloist in their performance of Paquita. Avery has also dabbled in acting, playing the role of Abigail in the Netflix film Driven to Dance. She has guested in many performances, including being the Lead Soloist in American School of Classical Ballet’s performance of Firebird in 2018. In addition, Avery has played various roles in The Nutcracker throughout her years including Harlequin Doll Soloist, Spanish Soloist, Snow Queen, and Sugar Plum Fairy.

Avery moved to San Diego at age 17 after being hired by Golden State Ballet and Pilates to teach their contemporary program. While there, she created many award winning contemporary solos for YAGP. She currently is a featured guest teacher at the Grand Premier Invitational Ballet Intensive. Most recently, Avery has moved back to Arizona and currently teaches progressions technique, ballet, ballroom, jazz, and contemporary classes at several studios in the Phoenix area.